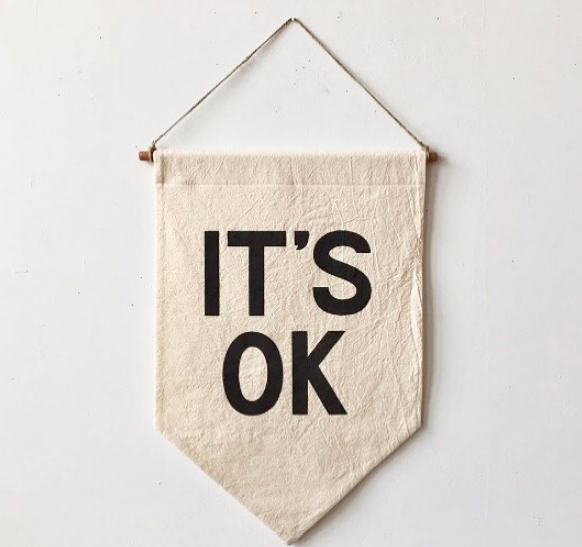 It’s OK not to be OK

Today I’m celebrating World Mental Health Day by reflecting on the things and the people that most helped me navigate my own path through mental dis-ease. These two simple words, “It’s OK” helped me on that journey. I was invited to join a ‘sharing circle’ with 5 other people. At one sharing, deep in depression and struggling just to ‘stay in’, one of the men offered me a simple tip that someone else had passed to him when he was in my position. He had written, “It’s OK” on a post-it note and carried it around in his pocket, taking it out for reassurance whenever he needed it. I followed this advice, thinking it pretty lame at the time, but alongside the other work I was putting in, it really did help. This simple reminder that ‘It’s OK’ helped me to trust the process. I was not falling deeper into a black hole. I was travelling through a tunnel. The worst thing to do in a dark tunnel is stop, the best thing is to keep going till you reach the light at the end. It is there. Suicide is a permanent solution to a temporary problem. It may feel like nothing will ever be OK again, that you’re life is in fact over, but let me tell you, from one who’s been there, this is a new chapter of your life beginning. And you can have no idea how flippin’ brilliant that new chapter is gonna be until you step into it. So let the past chapter end. Keep going. Share how you’re feeling, connect with others who’ve been where you are now. Those people are gold! Do not give up on yourself. When I was looking for an image to fit this post, I found (and ordered! yay!) this handcrafted ‘It’s OK’ banner from @ashleybrowndurand It’s worth reading her personal story about creating the first of these banners when she needed that reassurance herself and how the imagery was inspired by the Woman’s Suffrage Movement and how, having stumbled upon some other artists using affirmations in wall hangings, she almost gave up before she’d started. Thank goodness she kept going! 9 years later, she’s made over 7000 affirmation banners to help remind people all over the world to keep pushing forward with kindness and bravery. I wish you well on your journey. It’s ok. It really is x